Hi friends
I live in little village Zlata Kotruna, south of Czech Republic
Here was 26th infantry division US ARMY
My father was friends of the soldiers

I see a few photos, the Jeeps had here remodeled mudguards

PLEASE - can You writte reason why was do the remodeled ? 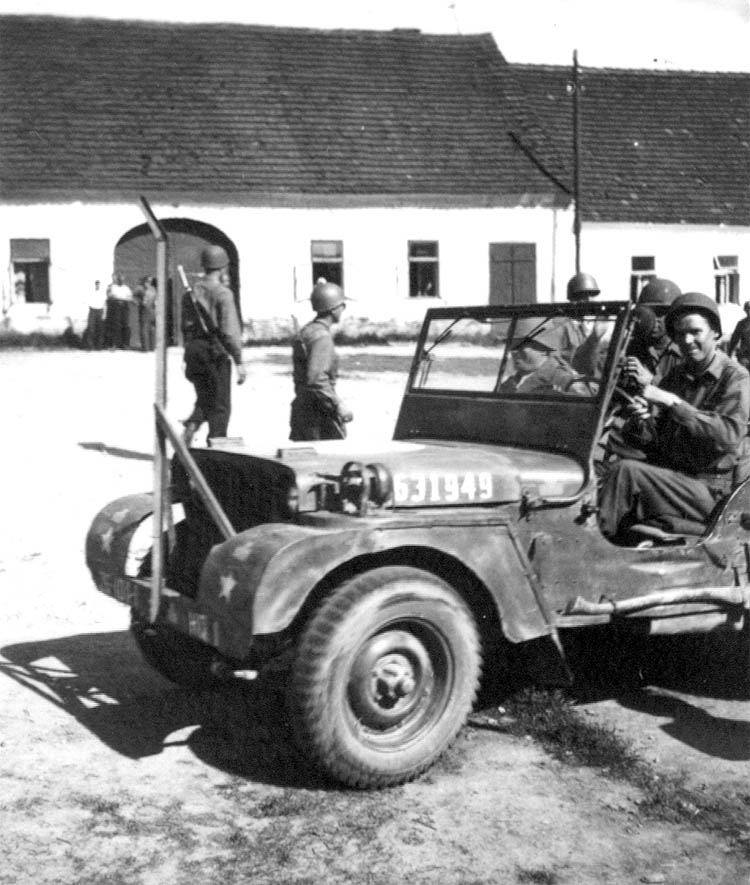 Many soldiers did this, both to make their jeeps look like the cars they left behind at home, and to help keep them from being splashed by mud.

Thanks for posting that great picture of Yankee Division Troops and their beautiful jeep in Czechoslovakia during the War, that you have a family connection with !!

That is great that your father and family has a connection to them !

The fenders were done like that by many Jeep drivers to protect from splashing mud and water as Spring thaws brought a lot of slush and muck to European roads in 1945.
Plus many potholes and shrapnel holes in the road were filled up with dirty water and debris in general, and would really get all over the passengers.

Your jeep picture fenders look pretty nicely done, and it is still in tactical service with the wire cutter on the front bumper.
The jeep was with the 101st Infantry Regiment HQ detachment, of the 26th Infantry Division.


My father was air evacuated out of Pilsen, Czechoslovakia in June 1945, as he was down to 90 pounds as a POW.
He made his way there with other US POWs from Bad Shandau, Germany, Stalag 5A Lillienstein Lager, having been transferred there from Stalag 4B, to that work camp. ( Arbeit Kommando )
The GI's were spread around the perimeter of the airport there, until C-47's came in and started evacuating the prisoners back to Army Hospitals in France. They had camp fires all around the airstrip perimeter.
He said he always felt bad for the air crews, as all the POWs had dysentery, and made a mess of the aircraft.
But they made it back, thanks to the C-47s and their crews.
He said there was an all Black unit of US Soldiers there in Pilsen, whose Sergeant asked my father if he and others were POWs. My dad say they were, so the Sgt. went to his truck convoy that was stopped, and collected all the Hershey bars and candy from his Troopers, and gave a duffel bag of candies and supplies to the my dad to share with the other ex-prisoners.
He always was thankful for that Black Sgt. and 50 years later our neighbor here in Florida and my Dad were talking about WW2, and their experiences, and he found out that he was a Sergeant, and was in Pilsen as well, and remembered the starving US Soldiers there. He likely was the Sgt. that collected all the candy bars from his Soldiers for the POWs and handed it to my father.
He was a great family friend of ours, his wife was from England and had lived through the Blitz as a child in WW2.