And those would be the deck covers piled up. More research, only way to go.

If you watch the beach salvage video on YouTube,
https://www.youtube.com/watch?v=6ZLYbpr4P7o
the tray ("Line Rack Aft") at the back of the craft is the place they lay out 150' of the line so they can go in and follow the Assault Landing Boats and landing craft in and toss them a line, then back out into the surf and tie off, take out slack and pull the boats back through the surf.
This would be an LCPL, one salvage boat per 15 Landing craft that follows in the middle behind the landing, extracts those that get stuck or worse and keeps things clear on the beach.
The video is great showing gear they were to bring, pumps, buckets if needed, radio operator or signal man, etc.
I have searched for LCPL and LCPR (ramp) and neither have a spooled winch or line coil on the stern/bow, also (not evident in this photo) where would the engine be if it were an LCP? maybe it's the angle of the photo. (See correction above British LCA)

How about the age of this Landser ? Looks like the guy in front is even carrying his 98a Mauser ! 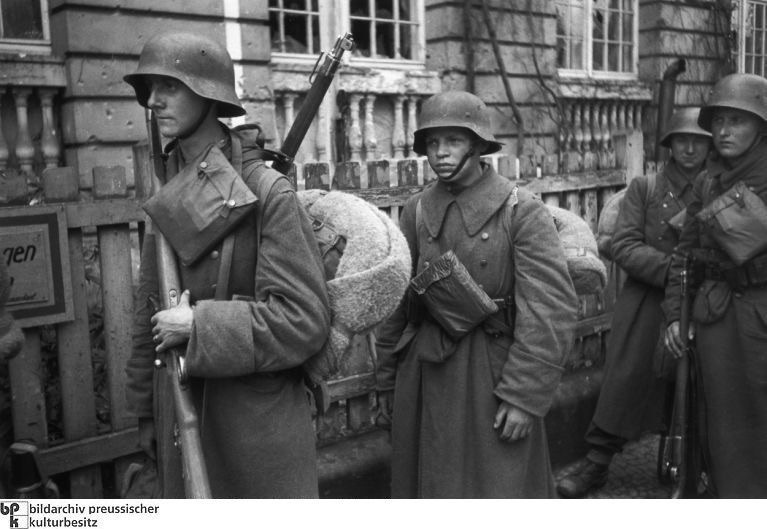 Not sure his Brother may be in front holding his Rifle.
Back to the original landing craft photo, it is likely post D-Day landing after everything was secured (Went on for more than a Month) notice the Typewriter held by the clerk on the right, the large crate hindering exit behind him and the MP....not your assault troops (ala Saving Private Ryan)
V/R W Winget
Looking for 1918 Standard B 'Liberty' truck parts
Top

Could easily just look young for his age. Heck, I was being carded almost until my 30s, only my receding hairline showed my age. When I was 21, people thought I was still in high school. Even with a valid ID in bars, some guys at the door wouldn't let me in. I called over a cop once and had him run my (real, not fake, showing I was 21 at the time) license for a guy at the door of a bar once because he said, "This is the best fake ID I've ever seen, how'd you make this?"
As for the landser above, the Germans were certainly taking kids at the end.
1944 Willys MB #366014
MVPA, REMF, former US Army Captain
Top
Post Reply
19 posts