I've found that nice photo on the U.S Defense Logistics Agency website
I'm curious to know what you think about the age of that young GI right in the center of that LCT in Oran Algeria, November 1942?
16 years old max? 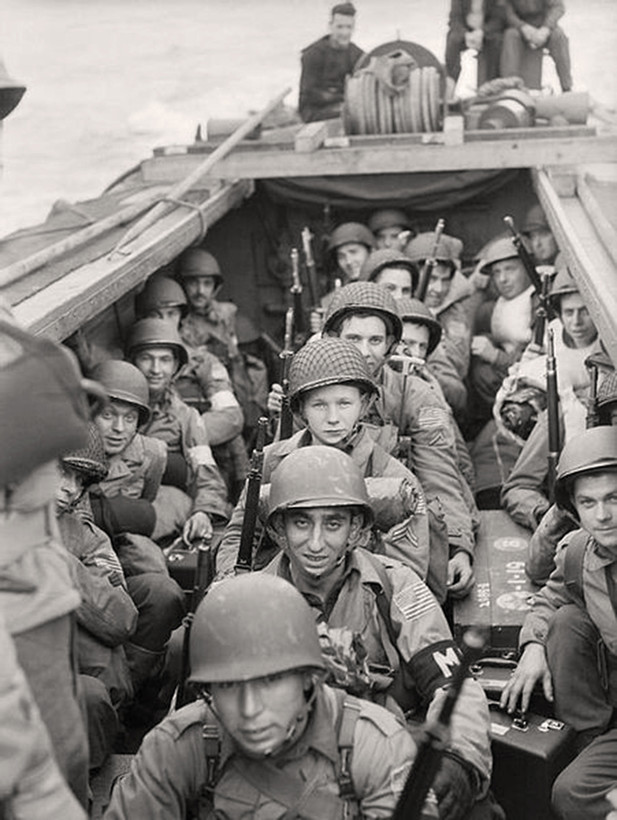 Corporal stripes, likely an old timer by then, so late 17. Probably did Boot camp at 15.
No X-Box players in there!
V/R W Winget
Looking for 1918 Standard B 'Liberty' truck parts
Top

I didn't know that they could be enlisted @ 15, at least to attend the training/boot camp

sneaking in was easier then, I think minimum age was supposed to be 18, with parental permission for younger, something like 16-1/2 or so. Not up on WWII Personnel regs. I know my father joined at 16-1/2 in the Ohio National Guard.
W Winget
Looking for 1918 Standard B 'Liberty' truck parts
Top

They are ALL heroes Yves, i see your point, he may be like me and looks young for his age.

I wonder how many survived ?
Top

Wasn’t Audie Murphy about that age or younger when he first went into combat?
Top

Indeed. If he did survive, and was 16 at the time, he would be perhaps 93 today. It is also interesting to note that the larger group appears to be not a direct assault party. Many Springfield muzzles are shown. The MP too would perhaps not be part of an assault team. The most interesting item I find to be the two cases directly to the left of the young GI and below the hand of the fellow at his left. They appear to be perhaps typewriters or some other piece of equipment not directly related to an assault, or waterproof application. Would really like to know what the group represented.
Top

BTW, that appears to be other than an LCT - more like an LCVP or so. Also, way aft, to the right, one fellow has an early period flat helmet. Englishman perhaps? All reporters maybe ?
Top

It looks like a Higgins boat (LCVP), maybe modified. It was commonplace to bring troops and supplies via landing craft until a port was established. It was the only way. They did it at Anzio for months. 15,000 Allied soldiers total would serve at General Clark’s 5th Army headquarters at Caserta alone. They had to get there somehow. Audie Murphy lied about his age as did many others. The sense of patriotism was high. My boys are 21 and 17 and both look older than those two in the middle. A lot of worried mommas on the home front, even if her baby was support personnel.

Another great picture telling a story.

Great picture indeed !!
He looks to be all of 15 or 16 years old ! I knew 2 WW2 Veterans that were 15 years old when they signed up
and shortly were in combat in France.

That was the fabric of the Greatest Generation was made of, having been through the Great Depression and tough times.

But note the PROPER WAY to display the US Flag on the US Uniform.
The US Flag on the Left Shoulder.
Just like the Astronauts on the Moon.
Maybe the pentagon should get their act together, and replace the hideous looking reversed US Flag that they, in their ignorant wisdom, put on the US Uniform.
It looks terrible, the WW2 GI's in the picture are Winners, and Winners where the flag like that.

In MY opinion, placing the flag the way they do now, degrades the uniform, degrades the US Flag,and is insult to the common senses. Nobody displays the flag like that, anywhere, ever !!
But leave it to some morons in military leadership to deliver that concept.

They have precedent...... from WW2 to look at, and to study, and can then see how the Flag was displayed on the US Uniform of GI's who won the Second World War.

I am looking forward the WW2 Dress Uniform coming back, which is on the way, and maybe they can clean up the modernist trends in uniforms.

Yea, likely the same people that seem to change all the other uniforms, and new digital camouflage patterns seemingly every other year now, for every branch of service.
The money they waste on that should go to say .... bringing back quad 50's for the GI's to defend themselves, who pay the price on the front lines in hostile countries every day, in wars that the general public and most politicians have long forgotten about, not to mention the media sources.

Give them multiple quad 50 batteries on every outpost, aimed in every direction, and every field position, and convoy that they can possibly be employed. At least they could have substantial firepower with them at all times.

I'm always amazed by how you analyze photos

!
thank you for these indications that give a different light to this photo!

Ray "Now a pet peeve of mine ...... maybe it is just me ....."
Yeah it took a little to get used to, but it makes sense when the explanation for "why" (below) it always has the blue field forward is applied. What will really throw you is the IR flag were only given entering (and taken back when) exiting theater for both shoulders to try to IFF each other, one of each facing opposite of each other make you have to think which way to apply each after doing your laundry... "In 2003 the uniform regulation for the Army was updated. Army Regulation 670-1, “Wear and Appearance of Army Uniforms and Insignia,” addresses explicitly the proper and lawful placement of the U.S. flag patch on the Army uniform.

The regulation states that the stars are to face forward. When authorized for application to the proper uniform the American flag patch is to be worn, right or left shoulder. One of the flags will, therefore, be reversed (right shoulder) in order to adhere to the regulation and custom of having the stars facing forward. The term, “Assaulting Forward” has been adopted by combat troops (instead of "facing forward").

The appropriate flag (color or subdued) for the right shoulder sleeve is identified as the reverse side flag."
Looking for 1918 Standard B 'Liberty' truck parts
Top

I have lots of interest in what's behind the obvious. It isn't difficult to assume the photographer was focused on the young lad. The others in the landing craft don't appear to be too concerned about being shot at (the photographer must have been standing to get that shot, e.g. head above the ramp). The fact that a Higgins boat is an LCVP is moot. What is of interest here is the wooden structure. With the wooden "rails" and the construction at the rear, it could be that a tarp may have been installed so as not to allow the contents to get wet, or perhaps the winch at the rear aided in moving heavy loads to the front of the craft. Conjecture on my part for sure, but of interest nonetheless.
Top

The wood structure is what intrigued me the most. It does look like a large tarp behind it. Oran would have been modern amphibious warfare in its infancy. It shows all types of MV’s were modified in some way to suit the battlefield field needs.
GPW 110748
Top

Great photo! I notice in the very rear background, to the upper right, the two guys just sitting casually. They don't seem to be too concerned the way there are sitting in the open like that. Could be well out, however.

Thanks for posting!
Zeph