I know there’s been many posts on colors, but I just bought a 1962 USMC M38a1 that is super original and I have a few questions.

1. There’s some evidence of a layer of blue (strata-ish) paint on the Jeep. Is it possible the USAF received M38a1’s from the USMC that late in the life of that type of Jeep? I understand some USMC jeeps were transferred to the Air Force…

2. I haven’t yet scraped where the engine serial is located, but I gotta believe it’s original to this jeep. It’s painted a nauseating lime green. I’ve seen the color on more than one survivor M38a1….is that correct?

3. How rare is this late model M38a1? If it is possible it went to the Air Force I’d love to paint it strata blue, but I’m kind of a purist and want it close to its original self.

Thanks to the brain trust in advance. I always find the amount of knowledge here incredible.

Anything is possible; however I consider it highly unlikely anything went from the USMC to the USAF.
If you are a purist and want it original, it needs to be 24087. Post 56 Semi gloss OD.
I just painted one Marine Corps forest green. Hideous, but the new owner was a Marine. Did yours have the rear bumper cover with the end lifting hooks? And Undercoating?
Lime green? That can't be right for anything but Bubba.
What is your serial number? The Marines used them after the 151 came in because they didn't like them.
Disclaimer: I know nothing about the M38A1; only had one.
U. S. Army 28 years.
Armor Branch
Top

The first of many M38A1s I owned had Air Force blue on a Marine Corps jeep, so I would say yes the air force did grab some. I lived not far from Shaw AF base in SC, so the jeep could have come from there, this was around 1977. I remember the jeep being a Marine jeep, one because I was leaving very soon for Marine Corps boot camp, and two, being from a 100% Army family it was the first military vehicle I ever owned that had Marine data plates on it.
Paint it Blue, it is the correct history of your jeep, but if I remember....long time ago, under the hood, and in the glove box was still Marine Corps green.
More history on your jeep, the lime green paint job was not Bubba, but at one time your jeep was in some type of fire service. In the late 1970s, someone came up with this bright idea that all fire trucks should be paint a Lime Green, to make them more visible.....it was a complete failure! Lots of fire departments across the nation painted their fire trucks a lime green. No body would yield to them because they did not know they were fire trucks,,,fire trucks are red. So, in the 1980s everyone repainted the fire trucks back to red. Your forest loan trucks, CD trucks, brush trucks were the last to get repainted as their was no rush, and a lot of them got turned back in still painted "Lime green". Then they sat for years till they were sold off by the Forest service. I still see M37s and M715s pop up that are still lime green.
One of the few, Frank USMC RET
Top

Could be mistaken, but didn't the Marine Corps shed some of it's M38A1's in favor of that short-lived experiment called the Mighty Mite?

Frank: I’ll try to post a picture of engine compartment: looks like a duller lime green than the fire type vehicles, but you may be on to something…

Ron D: I think you’re right…production may have been a little slow on the 422 so they kept up the M38a1? Good question. 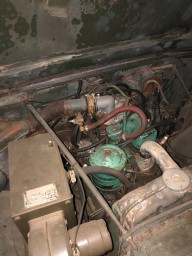 Tuna
Sorry misread your post, to many hours at work, but I retire for good in 4 days!!
I was thinking the whole jeep was Lime green!! not the engine. On that it looks like you have a rebuilt motor in it. Here at White Owl parts company in Kinston NC, a LOT of rebuilt motors that would come in from Europe were painted that color green.
You have the heater kit in yours also...HOME RUN!!! You did good.
Sorry again on the paint mix up , this getting old is not for sissies...
One of the few, Frank USMC RET
Top

Tuna
You might want to put in your location...you could be down the street from one of us.
One of the few, Frank USMC RET
Top

Congrats on upcoming retirement Frank! Thx for the suggestion—went in and edited my location (Pearland, TX)…yes, been reading a lot and it seems some NEKAF jeeps have that color engine too…

I took an early retirement recently too…never been as busy as I am now!

Here is another theory...
After seeing service with the Marines, it was surplussed and given to the Civil Air Patrol.

By the time the Marines got rid of their Jeeps, the Air Force was likely getting rid of theirs...replaced by M151s or for Security Forces work, by CJs, Broncos/Blazers and especially, pickups.
M38A1 MD 82551. Built 3/1955. Purchased in Nov. 2021.
Former owner/restorer of 1977 Jeep CJ-5 Renegade Levis Edition.
All stock w/factory V-8. Used as a daily driver for 7 years.
Top

That is a great possibility! I have seen several Civil air patrol M100 trailers for sell in a air force blue.
Tuna, second retirement from the government, very lucky in life, still run and in good health, but at 63, going to slow down and enjoy my trucks now.
Good luck with the M38A1, I saw one still in use by the Navy in 1982, and it was a June of 1952 delivered one, one of the first ones made....still going and serving, great jeeps!
One of the few, Frank USMC RET
Top

Frank USMC wrote: ↑
Sat Dec 25, 2021 5:12 pm
That is a great possibility! I have seen several Civil air patrol M100 trailers for sell in a air force blue.
Tuna, second retirement from the government, very lucky in life, still run and in good health, but at 63, going to slow down and enjoy my trucks now.
Good luck with the M38A1, I saw one still in use by the Navy in 1982, and it was a June of 1952 delivered one, one of the first ones made....still going and serving, great jeeps!
One of the few, Frank USMC RET

I dont know anything about the USAF taking USMC hand-me-downs (A little inter-servise humor, if you please -- LOL)
But I did spend 20 years in the CAP. Their philosophy from the end of WWII up into the 90s was to use surplus DOD equipment in order to keep its capital expenditures to a minimum. They used a lot of tactical vehicles, personal gear and uniforms. The cadets found it all very cool. They even acquired aircraft including the O-1 Bird Dog through the DRMO's. By the early 1990's the CAP started to sell off their ex-military tactical vehicles and aircraft. Gone were the tail draggers, the jeeps, etc. They discovered the maintenance both in personnel expertise, parts and repair costs in general were too high. There was also a concern about liability if any of this equipment were involved in an accident. This included the aircraft. In the 40's and 50's most private pilots learned to fly on tail wheel aircraft. By the 90's almost no one got their private ticket in a tail dragger. It was better to use more commercially available equipment and safer for CAP's missions. I acquired an M-37, an M-38 and an M-100 during their sell off of tactical vehicles. All of them were painted Strata Blue over OD. Being the Civilian Auxiliary of the USAF, Strata Blue was the preferred color for the vehicles. Now the predominant vehicle that they use is a 12 -15 passenger van and they are for the most part painted white.

Return to “M38a1 Technical Knowledge Base”