by Steve Webb
The whole thing is interesting but the uniforms are interesting. They look like coveralls to me. Also why parachute out of a glider?

Steve Webb wrote: ↑
Tue Mar 26, 2019 7:44 pm
The whole thing is interesting but the uniforms are interesting. They look like coveralls to me. Also why parachute out of a glider?

They're flying into a war zone. Structural damage or fire due to flak perhaps.

by Klaas
It looks like a pre-invasion training exercise, doing all kinds of scenarios. Also picking up gliders by in flight C47's as they would do (and did) after actual landings when the landing zones were clear of enemy action.
The camouflaged uniforms are indeed interesting, as they were not used in the actual invasion in Normandy to avoid mistaking them with German SS camo. They were used in Pacific theatre.

Nice point for Airborne jeep re-enactors: you need a couple of buckets full of sand and dirt spread out in your jeep as you will have seen in this film

by Steve Webb
The only gliders I can find not used in Europe were in the CBI theater with Wingate and the Chindits. Maybe the parachutes were to show they could deploy with no sound from a plane but poor old pilots would be up a creek landing and alone. A little camo was used in Europe but they were HBT pants and jackets with some units in 2nd armored division. If you looked at other video I posted on loading equipment on a glider you can see the jeep did not just drive out quickly after landing with all the lashing they did

by Assaultdriver
In this crowd, I' sure everyone noticed the bumper numbers...13th Airborne Division. Thought it might have been one of Patton's Ghost Army units but it was a real unit and underwent lots of stateside training (and filler for the 82d and 101st) until deployment to Europe in Feb 45.

Has to be a training/propaganda/morale film...everything's too clean and orderly.

Interesting paradrop. I don't recall it ever being used in combat, though I would assume such a technique was a proof of principle, in case we started to run out of C-47's. Assumedly the glider would return with the tow plane.

by Fernmelder
And here's another:

by Steve Webb
Am glad you found it. I had posted it but account was terminated by You tube?

by D.R.H.
Not to be too morbid, but did anyone happen to catch the guy at 00:54 seconds into the video? Paratroopers are exiting the gliders and the parachute on 4th guy out of the glider on the left doesn't deploy properly, he plummets. When I see a video of paratroopers jumping out of a perfectly good aircraft, I look to see if all 'chutes deploy properly. It's not that I like seeing the tragedy, I just HATE the idea of falling to my death in this form.

by YLG80
You are right, there was a problem.
The chute did not fully deploy.
And I've not seen the guy opening the "reserve".
That's really horrible and this is perhaps the reason why the footage was left unused.

by W. Winget
I didn't see it at that, (Edit I'm wrong as we see in the next post) I assume it's the far aircraft, and if you count bodies to chutes as they jump, his chute deploys behind the previous jumpers chute before the film switches frames from what i saw.
Static line takes a while to pull the chute out, (A L O N G while if you are jumping

...) and depending on his door position, it can change the way the chute actually deploys as well, so I think he was OK in that jump. I theory, he would also have a reserve mounted on his front belly, and the only time US deployed without a reserve (to my knowledge) was Grenada, where 82d was jumping in so low it wouldn't have mattered.

I digress...
My last jump was out of a C130 at NTC , into a valley....they greenlighted everyone in the valley, kept the green light on as they were heading level....across the hill top, where for the poor jumper....the terrain rose up under the aircraft and that is when I exited, counted to 4, looked up to check canopy deployment, and immediately smacked into the ground.
I cannot print what thoughts and words escaped me following that moment here on a family forum...

by YLG80
The poor guy was falling must faster that the others.
The guy seems to be packed in his parachute. 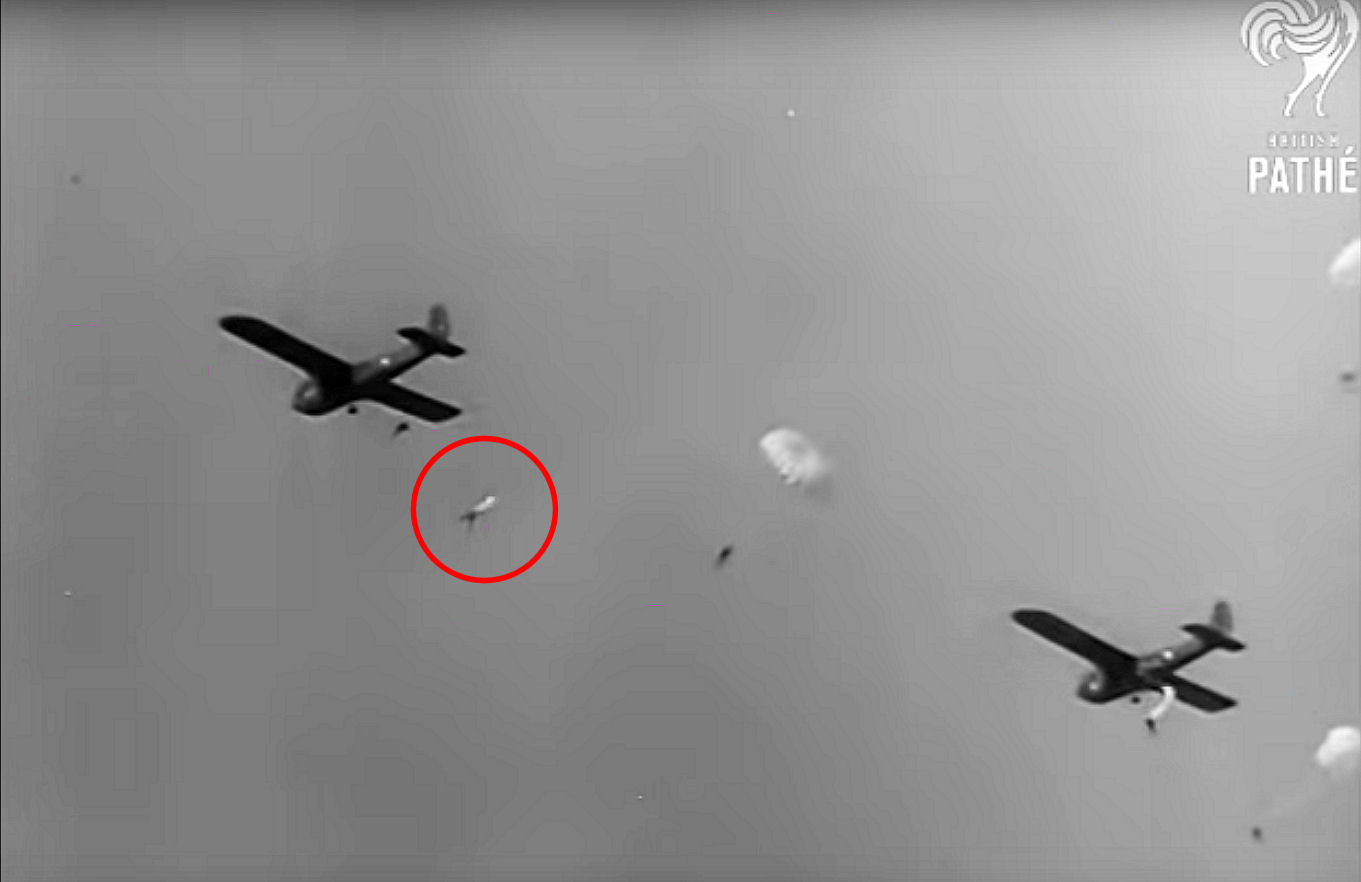 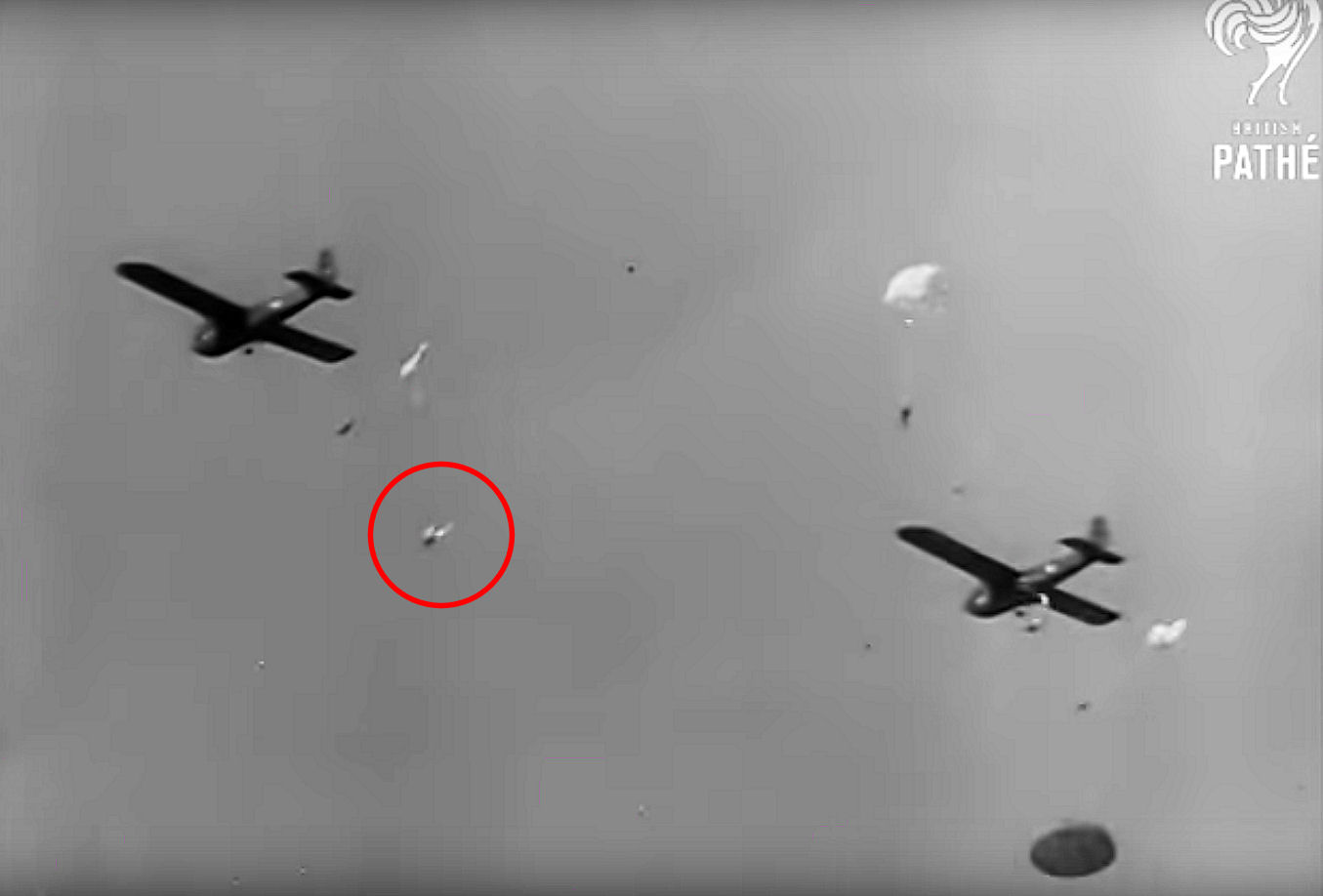 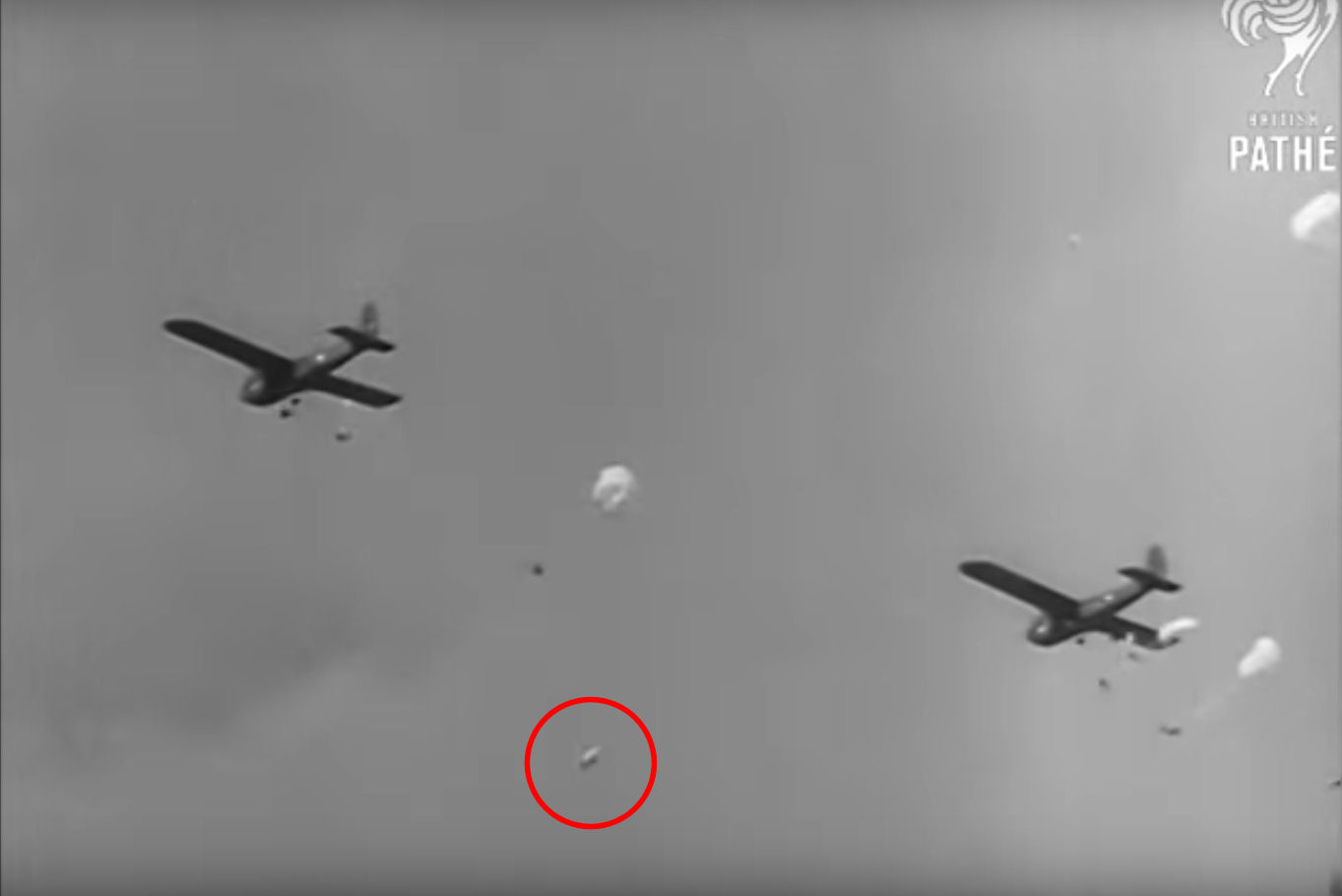 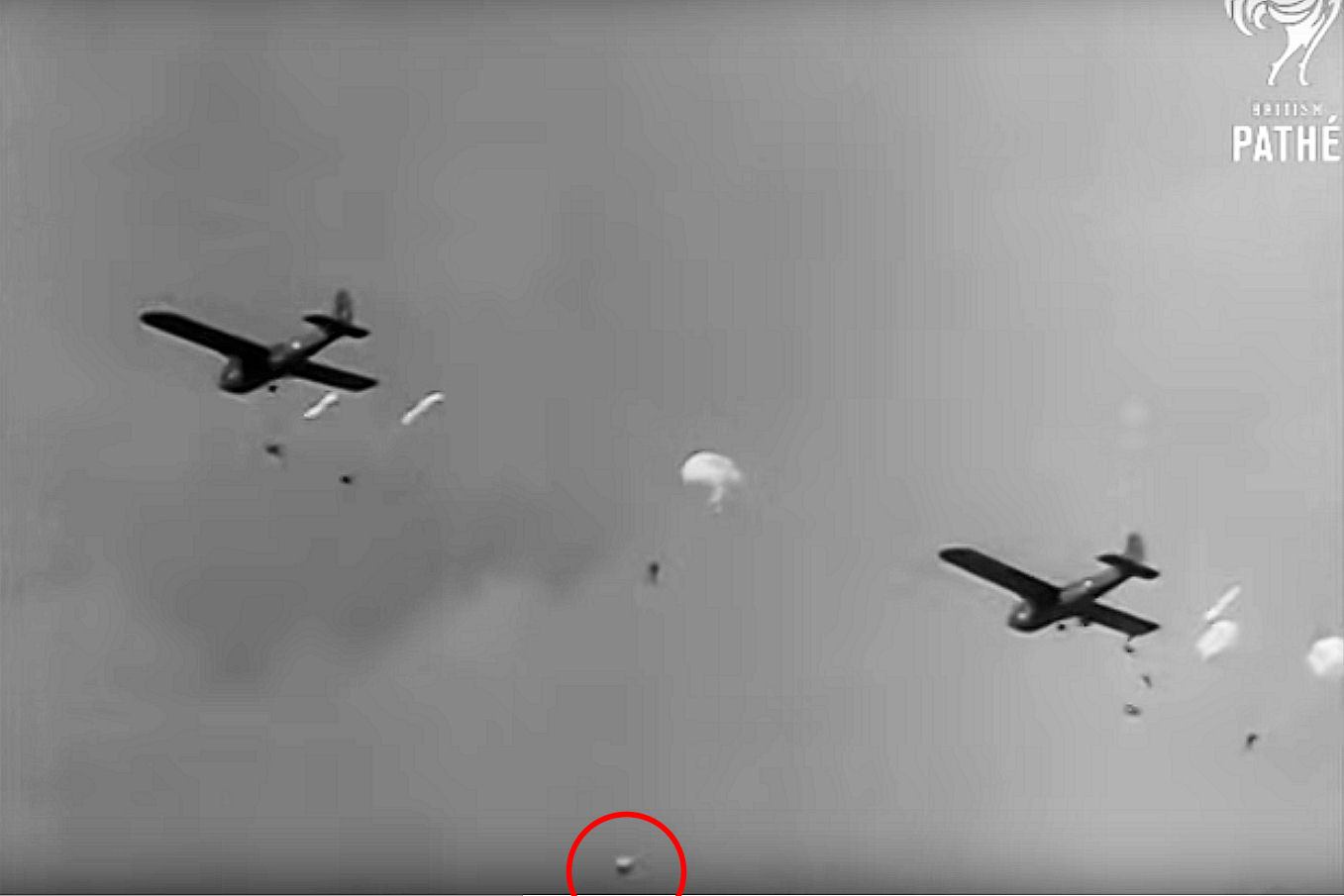 by W. Winget
oops...near aircraft, I did miss that, hope he did have a reserve (and manage to deploy it)
They used to tell us "You have the rest of your life to get that chute open"
Paratroopers are not skydivers....
V/R W. Winget

by loni17thAirD
This is great airborne history! In WWII the Army tried jumping from the CG-4A Waco glider while putting paratroopers out of the C-47. This was tried to see if was feasible. It was never done in combat to my knowledge. The Army Air Corp also experimented with other aircraft pulling the CG-4A glider. They tried the B-24 liberator, B-26 Marauder and P-38 lighting. The parachutes paratroopers used in WWII, T-5 and T-7 were not the safest. The army did not have a quick release for the T-5 parachute harness until "Operation Varsity" conducted by the 17th Airborne Division and British 6th Airborne Division. That was the last combat jump in Europe during WWII.

by John Neuenburg
That guy looked like a goner.

The reason for putting paratroops in gliders was to increase the number of troops one plane could put into action.

The camo coveralls were designed for the army in the Pacific Theatre and were reversible brown pattern one side and green on the other which is what the Marines wanted. Some say Marines used some but probably this was because they didn't have the two piece navy contract camo uniform at the time and place. I believe there are sewn suspenders on the brown side and no pockets there, so one wonders if this was really designed to be reversible. There is a drop seat. I don't know if it's true soldiers wearing these in the Normandy area were shot by fellow troops thinking they were Waffen SS, but a camo pattern this bold is easy to spot on a moving man which is what the Americans were doing a lot. Good reason to ditch the uniform.
All times are UTC-07:00
Page 1 of 1
Powered by phpBB® Forum Software © phpBB Limited
https://www.phpbb.com/