I was wondering if you guys would help me identify the markings and accessories on 2 jeeps, photographed during the liberation of Pont d'Ain (close to Lyon, in France, late August-early September 1944). 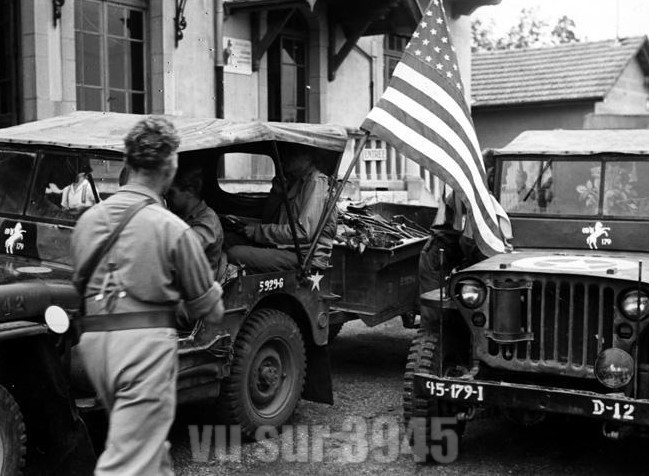 They have a lot of interesting features :
Regulation bumper markings (although they seem freehand drawn)
"Desert" Expansion Kit
Some strange vertical poles fixed on the bumper (for offroad driving? flags??)
A tactical sign I absolutely don't know on the bottom of the windshield, with a winged horse similar to the British Airborne emblem, with numbers on it (I can read '179', but what is on the left hand side???)
A number on the side of the body.
A kind of big lamp/search light right above the bumper of the jeep on the right.

Does anybody knows what these markings and accessories mean / are for?

The number on the side is the Early version of the Unit Serial Number
Chad Phillips
33rd Signal Construction Battalion
https://www.facebook.com/33rdSignal

Thanks!
Anybody for the windshield decal?
Top

The 45th infantry division had a 179th infantry regiment. And mostly formed from Oklahoma National Guard to that might explain the horse

http://military.wikia.com/wiki/45th_Inf ... ed_States) Yee Haw!
Stand for the Flag, Kneel for the Cross
Top

Do you think it could have been painted since the move to North Africa?
Maybe it isn't a winged horse after all...

Do you have more info about a horse typical of Oklahoma?

Think more like this for the posing of the horse

Not any particular horse for Oklahoma. I think the numbers above it are 45 and makes sense to me with the 179 under it. They were in fighting at Sicily, Italian campaign and southern France for Operation Dragoon then up from the south to end of war. No mention of North Africa for fighting.
Stand for the Flag, Kneel for the Cross
Top
Post Reply
6 posts • Page 1 of 1