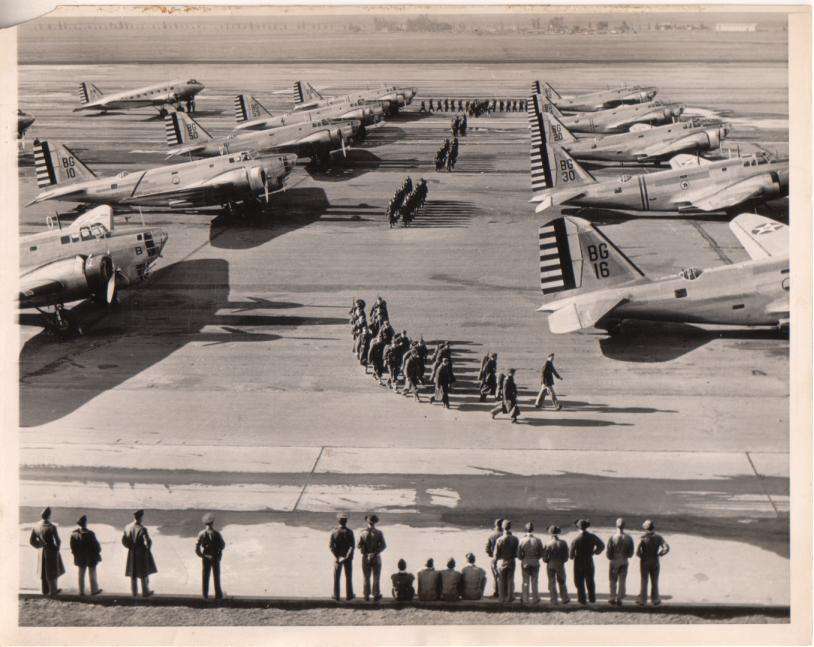 Douglas B-18A Bolo "shark nose" bombers on the flight line. Only 217 of these planes were built.

My good friend Peter Marini was an enlisted pilot in the 6th AF and flew the B-18 on patrol for German subs off the southern coast of the US during WWII. He also flew the O-47 and L-5 on patrols. Peter was guest of honor in my MB and CCKW during Memorial Day and Veterans Day parades for the past two years. He passed away last August at the age of 91.
2011 MVPA PIONEER AWARD - MVPA #1064
HONOR GRAD-WHEELED VEHICLE MECHANIC SCHOOL 1960 - US ARMY ORDNANCE SCHOOL(MACHINIST) ABERDEEN PG 1962 - O-1 BIRD DOG CREWCHIEF - 300,000+TROUBLE FREE M-38A1 MILES
LIFE MEMBER AM LEGION-40/8-DAV
7 MIL SPEC MAINTAINED MV'S
COL. BRUNO BROOKS (ARMY MOTORS) IS MY HERO
Top

What ever happened to the B18 bomber? What replaced it??
US ARMY 1995-2000
32nd Brigade,126th Field Artillery, Battery D
redarrowarmyparts.org/redarrowmilitaryllc@gmail.com
Top

Y1B-17 (late 30's early B-17)'s and the more modern B-17's starting with the B=17E that went into production in late 41. The US geared up big time and the B-17, B-24 and Amphibioius Patrol Bombers such as the PBY Catalina became the back bone for anti sub. B25, B-26, A-20 production along with B-17 and B-24 became the backbone of the first two or 3 years of the USAAF bombing fleet.
My friend and Americakn Legion mentor was in a Quartermaster Truck Company that convoyed from down South to Dow Army Air Field (DOW FIELD) in CCKW's while the base was still under construction. Their mission was to support a handful of B-18's that flew antisub patrol off the Maine coast.
B-18's continued to be used for maritime patrol, bomber trainers, transports, etc., for the remainder of the war. My friend Peter was only rated single engine and envied those other patrol pilots that flew later aircraft. The pre war Air Corps opted for the B-18 over the new B-17.
There's a lot more to the B-18 story that can be better told by other WWII aviation historians.
2011 MVPA PIONEER AWARD - MVPA #1064
HONOR GRAD-WHEELED VEHICLE MECHANIC SCHOOL 1960 - US ARMY ORDNANCE SCHOOL(MACHINIST) ABERDEEN PG 1962 - O-1 BIRD DOG CREWCHIEF - 300,000+TROUBLE FREE M-38A1 MILES
LIFE MEMBER AM LEGION-40/8-DAV
7 MIL SPEC MAINTAINED MV'S
COL. BRUNO BROOKS (ARMY MOTORS) IS MY HERO
Top

Thank you for your time in this and lesson when it came to this. Such great history and nice to know that people like yourself care about it like I do...
US ARMY 1995-2000
32nd Brigade,126th Field Artillery, Battery D
redarrowarmyparts.org/redarrowmilitaryllc@gmail.com
Top
Post Reply
6 posts • Page 1 of 1