I’ve been following this forum for a couple months now and this is my first post. Thank you everyone for all the information and knowledge, I couldn’t have tackled this restoration without it. I have a 1952 M38 that I purchased a couple months ago and I’m finally down to a bare frame. Everything is off and just sandblasted most of the parts myself. Before I start reassembly I’m stuck trying to figure out what is original and which were mods added by the previous owners.

Right now I’m trying to figure out which holes are original to the frame and which were later added by the previous owner on my front frame rails. I’ve attached some photos and arbitrarily labeled the holes 1, 2, and 3 for reference (see photos). The previous owners had a plow attached via a bracket using holes 1 and 3. Hole number 2 was completely covered and never used, and wasn’t discovered until disassembly (1st photo shows it hidden). Hole 2 has a threaded nut welded to the inside.

I’m inclined to believe that hole #2 is original since the previous owners had it completely covered and weren’t using it for the plow bracket and they wouldn’t go through the trouble of welding a threaded nut to the inside of the frame and never use it. Hole 1 is oddly shaped and looks like it was drilled-over to fit the plow bracket, possibly also making it original. I’m pretty sure hole 3 was drilled later by the previous owner.

If that’s the case did I have the “old style” lifting shackle? Did the old style brackets attach to the frame through nuts welded to the inside frame? Or did they just have traditional bolt/nut/washer? If that’s the case it seems possible that hole #1 did have a thread and they removed it to attach the plow bracket. Although I was told it was a 1952 model I have no readable VIN numbers to confirm this. Wasn’t the older style lifting brackets more common in ‘51 models? Does anyone have the exact dimensions from hole center to center of the old style bracket to confirm the holes match up?

Or...did I have the later lifting bracket (the ones that have one connection point directly to the frame and the other attached to the front bumper/frame). Any reason I would have an unused threaded hole #2? For a winch? Just a mod done later by owners? Something else?

Any insight or thoughts would be appreciated. Thank you again for the help. 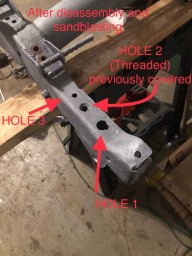 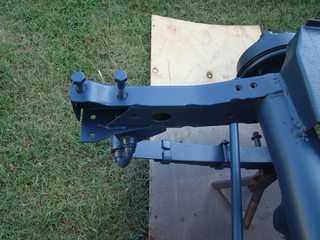 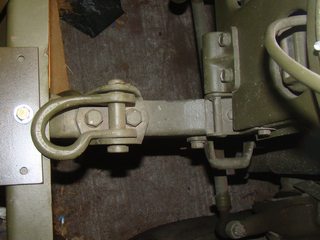 The nuts for the lifting shackles are spot welded to the frame.
It appears you have the early style and one hole has been wallowed out with the nut removed and hole 3 is a Bubba added hole.
Kendall
Top

Thank you so much! That’s exactly what I was hoping was the case. I just needed that 2nd opinion before I start welding and repairing holes. Thanks again!
1952 M38

Welcome.
You need to get the green book, M38 Restoration Guide. It will answer all your questions; you can't restore an M38 without one; at least it makes it 1000 times easier.
U. S. Army 28 years.
Armor Branch
Top

Seems like the restoration guide is getting harder to find. I only found one on eBay for 65+shipping. Amazon is failing me.

It’s the one by Ryan Miller right? Seems like the one for sale is the first edition though(black script on cover), is it worth getting 1st or waiting and finding a 2nd edition?
1952 M38