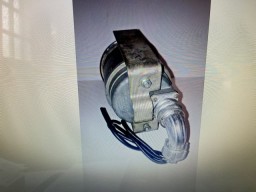 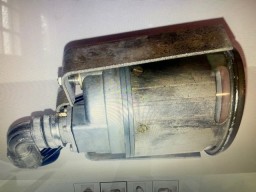 Has anyone seen one of this type of speedometer or know what or where it would have been used on. Supposedly it goes to an M38???? I've never seen one of these??? The numbers on the face of the odometer are 7527357 AC1580972 The numbers don't match the G740 parts manual but their not far off.
Bob
Top

Definitely not an M38; looks like it is for a submarine; note the sealed connector.
U. S. Army 28 years.
Armor Branch
Top

More than likely an Armored Vehicle Speedo.
Why? It uses Electric drive VS cable, so they could run a sensor on a shaft and tell the speed VS plumbing in a cable.

All jeeps (from beginning to the HUMVEE) and most ground wheeled vehicles used cable driven units off the transmission or transfer case, so it's not an M38.
A photo of the face would help (especially the speed). It has the side illumination cutouts for military dash board light system of the M-series vehicles VS WWII front illumination style.
So it's on e-bay: https://www.ebay.com/itm/Vintage-AC-Mil ... 3803931871
Sold in Canada, so possibly one of their mil vehicles....
0-60 on face, illumination gel coating on the 0-30...so that's the operating speed range expected at night...but that is identical to the M38/M38A1

so not really that helpful.

So possibly something with rear drive like an, M88, M1 Abrams that has a long way to go to reach the drivers position making electric wiring a better solution.
(M60 tank had a 150" speedo cable so that's not it, and M88 used the same driveline, but back further, so a "maybe" here)
M2 Bradley has the PACK right next to the driver but I can't recall the speedo being electronic.
It's not something before the 70's, as Hall Effect sensor sender units weren't tiny early on, so figure late 70's and up vehicle.
V/R W. Winget

Face is close to this but numbers are off and obviously wiring behind the unit would be a pain...

I had a guy who used to work for me in TACOM look it up; it is/was TACOM managed but he couldn't find a use on code. It's obsolete.
U. S. Army 28 years.
Armor Branch
Top

Might fit something like my XM104, a tracked experimental 105mm Howitzer on a mix of M151 and M114 drivetrain for example.
Hard to tell unless someone had removed and installed one in something before.
W. Winget
Looking for 1918 Standard B 'Liberty' truck parts
Top
Post Reply
7 posts • Page 1 of 1