Wondering what the pros have for ideas on how to repair this dent? If possible. What tools or techniques do you just use that might work here to try to bend this back out.

Replacing the whole quarter panel is not an option nor something I really want to do. 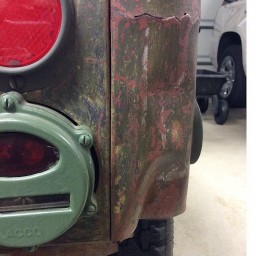 PROs?
If you cannot hit it from inside the fender well with the tire removed:

I would go to Harbor Freight buy one of the body stud welding tools, weld the studs on and use the slide hammer to pull it out.

Or go cheap, weld a few bolt heads with the Mig and screw on an eye to pull with a chain or loop attached to something rigid near the body.

Get it under tension a=then ping the metal around the outer edges while pulling to ease it out.
Then fill with skim coat, or if you had the skill/ materials, lead it in and shave it round, prime/paint.

But as I'm not a "Pro" I guess it would stay dented.

I would try to pull the dent out.
Get close to a solid object.
Cut a piece of pipe that is close to the original radius of the panel before the crunch.
Slide the pipe in place behind the dent.
Hook a " cable come along " in the pipe on one end and to the solid object on the other end. ( A Port-A-Power with a pull ram works nicely too. )
Start pulling, slowly.
As you pull, tap the sheet metal along the edge of the bend with a fair sized hammer.
Pull and tap. Hopefully the dent will work out. Takes patience !
Do not try to pull the dent out in one big bull hunch. ( A farm term.

Thanks guys, I’ll give it some hammer and dolly work, and some other pipe hittin techniques too. That upper horizontal crack seems to be just stressed and split metal from the dent impact years ago... I think. No bondo that I can find. Yeah, getting a hammer behind the dent is an issue, but maybe just tension as someone suggested, and tapping the edges of the front will work.

I am a pro; at using a 3 pound BFH as my primary body tool. Never failed me yet.
However, you may not get enough swing in there to do the job. Of course, remove the wheel first. However, there is the reinforcement for the alternate spare tire mount location on the right side, so if you can't swing a hammer, go to COA B. Your dent is pretty low though.
If you can't get it to move, then weld studs like explained above. If you can't weld, then drill holes, one or two will do, and use bolts and a flat piece of steel, to pull the dent out. Then use bondo or jb and fill up the holes. You are going to have to use some filler anyway because it will never be perfect if you don't. Won't hurt anything. Prime, paint. No one will be able to tell.
COA C; bring it over and we'll get it done.
U. S. Army 28 years.
Armor Branch
Top

Before you hit that area look at the area above your dent. 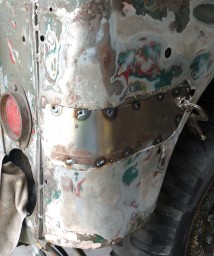