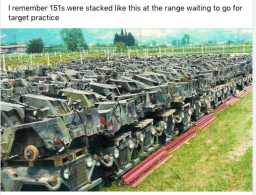 I read they were also selling them very cheap, just to get rid of them.
change user name to mark
Top

Those are M151A2 CDN versions. They would have been sold for scrap rather than range targets - at least I’ve never seen an M151A2 carcass on a Canadian firing range.

No doubt my M151A2 is in there somewhere in 2 pieces before it was reconstructed by some enterprising soul. Given the way they are stacked after being cut, I have no doubt that most of the salvaged Canadian “74 pattern jeeps” are “FrankenMUTTS” with non-matching front and rear halves.
Canadian Army (1988-2011)
Kandahar, Afghanistan 2006-2007