It will be on the data plate.I'll see if I can find a pic
change user name to mark
Top 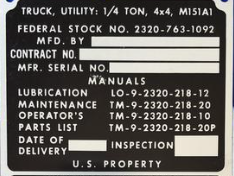 hambone
Sergeant Major of the Gee

Ken(muttguru) said they changed the number sequence in 1968.


In 1968, a new numbering system was introduced wich incorporated a "Year of Delivery" into it.... as per 02A 12368 - 12345. (a reversal of the WWII system that began with "20").
"02" again meant 1/4-ton truck, the "A" was used as part of an alphabetical sequence, the "123" would be followed by "124" etc, but the "68" stayed the same all that year. The letter used would change to the next-in-sequence once the numbering reached "999". Example 02A 999 would be followed by 02B 001. The actal year-of-delivery would change, but the changeover could result in one vehicle with hood number 02D 99668 being followed by 02E 99769. as long as you remember that the last two digits were "the year", it was a straightforward system, and for mutt researchers, it was THE BEST numbering system.
When the first A-Z alphabetical sequence was used up, a second letter was added, as per 02AB 12370 - 45678 (70 being the year of delivery).
The "45678" was the MFR Serial Number of that specific vehicle, followed, as you'd guess, by 45679 for the next vehicle etc.
A typical hood number would appear as 02GM 12370 (the second sequence of numbers did not appear on the hood but did appear on the dataplate).
In mid-1973, with the introduction of the emission control systems, the numbering changed yet again, this time to the 6-letter+digit system.
Instead of vehicle size and type being designated as "02" for jeep-type trucks, the new system used "NB", (Gama Goats were "NG" etc).
This system remains in place to this day . the combination of weight-class (NA, NB etc) along with the use of of (at first, numbers), then a combination of numbers and letters, followed by a combination of letter x letter x letter results in a possible combination of thousands of vehicular issues per type classification.
Does this make sense
Top

I would imagine the repos plate came about because the original one was missing.If this is an irrelevant post the admin ref can delete it.
change user name to mark
Top

markrdje wrote: ↑
Tue Nov 30, 2021 10:59 pm
I would imagine the repos plate came about because the original one was missing.If this is an irrelevant post the admin ref can delete it.

hambone
Sergeant Major of the Gee

Does your plate number have the 1968 number sequence? 02A,02B etc..., Send Ken(muttguru) a PM, I bet he will help you out with the number. Does your jeep have a BUDD tag on the firewall under the hood?
Top

The guy who sold me this 151 had put A2 front fender halves on to make it look like an A2, I made headlight guards out of metal rods/strip of metal
The numbers came from data tag along side the steering wheel, which were wore off alot due to age.
change user name to mark
Top
Post Reply
13 posts • Page 1 of 1