I have a General fire ex in my 151A2 that needs a recharge. General out of business I think but I would like to keep the original in the MUTT. And I would like it to work, in case I need it sometime. Any ideas who will recharge? Thanks Al Hansel 507-528-2780
Top

Check at your local fire station, they will know who in town does it.
Might be a welding tank store as well sending them off.
V/R W Winget
Looking for 1918 Standard B 'Liberty' truck parts
Top

I don't recall halon being a choice on a MUTT, as it needs to be more or less enclosed to be really effective, (Inside the Bradley for example) most were standard powder models, fitted behind the drivers seat (or other places, sometimes loose)
And not to worry about OD green, most did not get painted, they were commercial issue jobs just usually fatter short things VS the longer home style.
The issue one on my TOW jeep is red, atop the drivers fender with a Middle Eastern paper label pasted onto it for instructions, it just came back that way, in earlier life the jeep likely had a standard Red extinguisher that had paint slapped across it for camo.
V/R W Winget
Looking for 1918 Standard B 'Liberty' truck parts
Top

Mine is red, was mounter on a rear fender when I got the MUTT. Plastic nozzle with metal swivel pipe on it, folds down along side the extinguisher until ready to use.

I have a decontam unit on the other side or I would just use the original and a real working one but the mounting spaces are used up..

I have gone to the local fire depts and 2 fire ex companies and nobody can do it.

There is a letter from Utah? fire guy on the internet under General Fire Ext that says these are obsolete, company sold 20 years ago, and they should all be thrown away.

And maybe that is the hard decision I will have to make. Trying to be historic though.

Thanks for the help!

I'm leaning on the side of not having a Halon Extinguisher in a MUTT,
1) It was expensive
2) it did not cover all types of fires like brush, chemical, electrical (ABC dry chemical or such)
3) as soon as it went away the fire could come back.
4) It was a piece of BII and as such issued separately from the vehicle manufacturer, and could be any sort of extinguisher size and shape as long as it met the bill of approved for vehicular use.

Mostly Mech units had Halon for interior fighting compartments, and these tended to be fixed systems with sensors. Trip a sensor and all hell broke loose, but cleanup was non-existent, just reset (replace the errant sensor) and get the refilled bottles installed (no simple task, mechanics involved)

Hand extinguishers tend to be ABC dry chemical types (multi-purpose) so they do more than just a vehicle, as a puddle of gasoline burning (some one on fire) would not necessarily get full coverage with Halon or CO2 to suffocate the fire plus C02 doesn't do well on ("A") type wood/paper /cloth/ rubber fires....

The Army went forward with Halon systems in Armor from about the 80's on, but not so much with hand-helds from my failing memory, for the above reasons.
So you want a nice squat fat ABC dry chemical type. If it has metal pipe to the horn...bet yours is like this (only shorter) it's likely C02.
What's your label say? 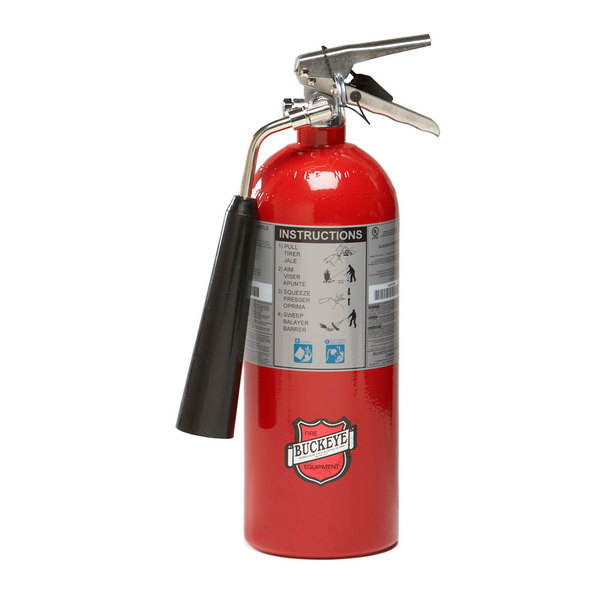 Now I also recall going to SSSC for items which were expendable, and you could unit purchase replacement items like Fire Extinguishers, which means whatever was in vouge the year you purchased a replacement, it's what was issued with your motorpool issued vehicle.
Bottom Line it ran a gamut of types depending on the replacements purchased and issued, also depending on local fire/safety regs and unit SOPs.
Our 1967 5 Ton M543A3 wrecker has three of the squat horned types behind the operator boom and another larger ABC on the fender at an angle, I wouldn't reach for anything but the fender model in a rush and not rely on it to work...Chemical powder gets hard in the bottom from settling and thus new extinguishers are ordered everywhere every few months/year(s) rotating old ones out it was an expendable BII component.
Just saying...
V/R W Winget
PS: For show, it's fine, but for real you want a Halon or C02 if you want your investment to last...ask David Wells, his DUKW lit up one day while starting and he had to use a dry chemical extinguisher. It really made a mess of things like wires and such to clean up. WAW
Looking for 1918 Standard B 'Liberty' truck parts
Top

Here are some pictures of my unit. 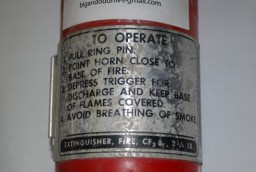 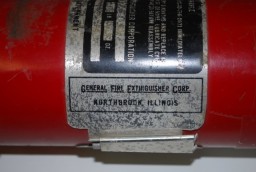 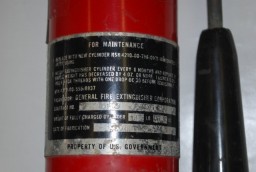 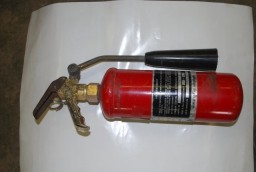 Just google "CR3Br fire extinguisher" like the label says and you come up with the Halon Material Data Safety sheet.
Now if you took it to a welding supply store, you might (ask/convince) them to send it in for a pressure check and refill with CO2 perhaps, rendering it as a useful shot of extinguishing agent, but little else, especially for the effort.

Now General Fire Extinguisher Equipment google search turns up the company, and they do refill Halon extinguishers, I would think to contact them if you want to still pursue it.
http://www.generalfireequipment.net/
V/R W Winget
Looking for 1918 Standard B 'Liberty' truck parts
Top

Thanks for all your help guys. I think General is out of business. I guess I will put a real extinguisher in there, pretend it is original, but having one that is useful in case I ever need it. Al
Top

You might be able to but in my experience they are going to tell you that if it is not for an electronics area or food service they will not do it due to the regulations governing chlorofluorocarbons. Since it is an ozone depleting chemical it falls under the same regs as refrigerants. As an aside, when a chlorofluorocarbon is exposed to fire you end up with chlorine and fluorine gas. The same gases used in WW! in the trenches. Kind of ironic that a fire extinguishing agent will put out the fire and then kill you isn't it? It even says on the side of the extinguisher "Do not breath the smoke". In our computer rooms there was a panic button they could push in case of fire that would flood the entire room with halon. There were also motion detectors and if there was anyone else moving in the room the system would not arm. Once the button was pushed you had 30 seconds to get out the door and then the doors locked. If anyone was inside the room and moved the system aborted If they did not move they would probably suffocate. Halon is not poisonous in itself but it displaces oxygen, hence the good fire extinguishing. We never had to use it so I can't say what would happen. In another place that had nothing but computers they had a fire and the system was used and the fire was put out in less than a minute and the damage was limited to just the one unit that started the fire. That building was so big they had safe rooms for the employees to retreat to in a fire. And they worked as planned.