Found this for the company but apparently they do not exist anymore. I am not paying for the business background.

I guess we will never know the whole story unless someone can get hold of one of the principles in the company. Sandy or Edward Schnieder.
They obviously had the capability to build the bodies but I am still a bit curious as to why there is only one known to exist especially with the very close proximity to Encores home base and the fact that Encore closed it's doors the year before and the body looks exactly the same. Here is a screenshot of the ad, click on it and it should blow up some. 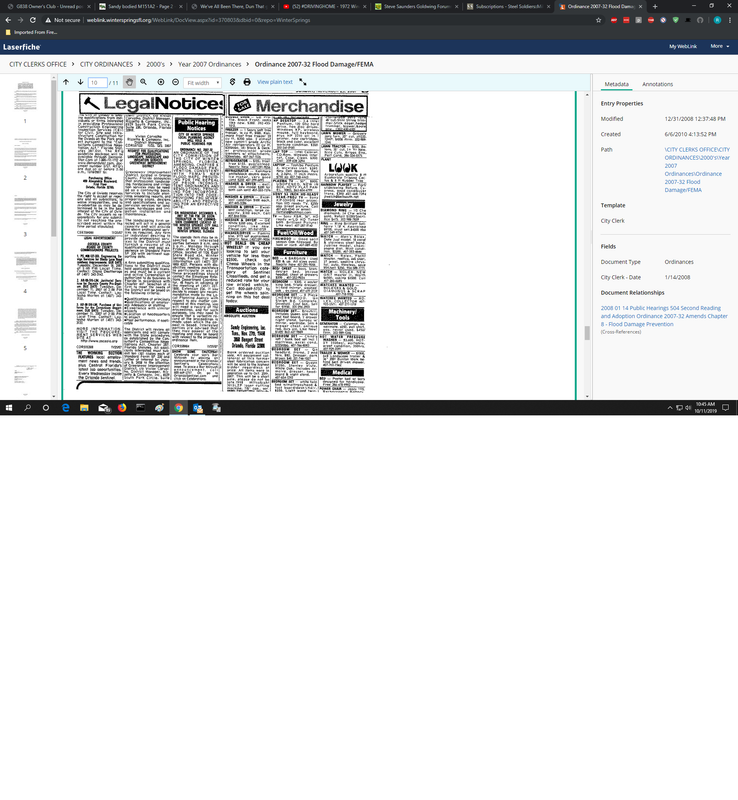 I find it hard to believe that I have the only Sandy bodied 151 ever made. I don’t think they would have spent the kind of tooling dollars indicated without running a number of bodies.
Top

I think it may be possible that the rights, tooling, prints, and machinery were bought from Encore by Sandy Engineering. Encore stop producing the bodies in 1999 and Sandy started in 2000, and they were not that far from each other. Me having the only documented Sandy body to date does not make sense. Could it be that some of the Encore bodied M151s out there are in reality Sandy production? As Rick pointed out, My Sandy is basically an Encore body. There could be owners out there that just assume there body is an Encore. I can picture a Sandy body sitting in a back room storage collecting dust and eventually made into a 151 and assumed to be an Encore body. At least this is one scenario. If I didn't have supporting paperwork to the contrary when I bought the car, I would also have just assumed that mine was an Encore body. Someday I would like to have mine next to a known Encore bodied 151 to compare the two bodies to see if they are indeed identical.
Top

Encore put a VIN tag on the engine side of the firewall so if it is an actual Encore it will have that tag. I don't think Sandy would have used Encores VIN tags. Who knows, From what I can see the company did not last long but had a lot of resources for that short period. One of the guys on the g838 sent me a pm with some info he dug up on the Sandy body and I am sure he will post it here when he can, he was having internet issues and could not get on the 503. I know I have been more often than not unable to access the 503 for some reason lately. Basically what he found is exactly what I surmised and you just said, that Sandy took over Encores operation. I will copy the links later if he does not get over here.
1964 M151A1
1984 M1008
1967 M416
04/1952 M100
12/1952 M100- Departed
AN/TSQ-114A Trailblazer- Gone
Top

Thundertaker wrote: ↑
Thu Oct 10, 2019 7:38 pm
Rick, Here is something that might be definitive concerning the mystery of the Sandy reproductions. Here is an actual advertisement from them which states, among other things, that there products are produced in house on state of the art machinery that they have invested many dollars.download/file.php?mode=view&id=162132

The add says A2 suspension. All I see is a bare bones body (shell).
Top

Well, From what I have been able to find Sandy bought out the left overs from Encore but here is the kicker, Encore was put out of business by the feds through a cease and desist order to stop making the vehicles. So Sandy could not possibly have gone right back into the business of making the vehicles in the face of the governments cease and desist order on Encore. I don't think Sandy ever spent any money at all on the body tooling. Any tooling they had if they actually had it, came from Encore who were probably glad to be able to sell it to some sucker that was not going to be able to produce bodies for the same reason they were forced out.
Like I said before, we will never know without a paper trail and apparently there is none. At least not one to be found without spending money and I am certainly not that interested in it.

I will check my files to see if I might have any other paperwork from Sandy on this Mutt.
Top

I have no doubts whatsoever that the vehicle body came from Sandy. Your previous paperwork pretty much proves that. The only thing I question is their claim that they were actually making the bodies. I think they were just working off of stock bought from Encore. Encore was served with a cease and desist from the federal Govt. to stop making the vehicles due to environmental and safety regs. Sandy would have been under the same restrictions even though it was just the body since it was designed to go with the components from a 151 and nothing else. If they were able to legally make their own bodies then what happened? Where did they go and why does nobody know anything about them?
1964 M151A1
1984 M1008
1967 M416
04/1952 M100
12/1952 M100- Departed
AN/TSQ-114A Trailblazer- Gone
Top

Back in the early 2000s, there was a guy in Fayetville Arkansas that went by the handle "otter". He had a MUTT related website with plenty of info (also on g503 under the same handle). The website is no longer active. At the time, on ebay, he was selling "Encore" bodies. As he related, a group in Burns Flats OK had purchased the remains of Encore and were attempting to build and sell hunting rigs with folding towers. A few months after this, another ebayer, in Elk City OK (Richard) was offering random M151 parts for sale. I began communicating with both of these guys. Otter was buying stuff from the Elk City guy (Richard) and flipping for a quick sale. As I had a meet in Phoenix coming up, I made plans to stop in Elk City and look over Richard's stuff. From what I was able to piece together from talking with both parties, the Burns Flats OK guys we not making it financially. They moved all of their stuff (in the middle of the night) to a warehouse in Elk City. They fell behind on their rent here as well. The owner of the warehouse (GPS coords 35°24'23.1"N 99°26'11.1"W), got a judgement against them and now owned all of this stuff he knew nothing about. Richard was a local that dealt in used and NOS ag inventory. He figured that parts were parts and he should be able to sell this M151 stuff, although he had no idea what an M151 was. He struck a deal with the warehouse owner and began selling off parts. On my first visit with Richard, I came home with 2 Encore Bodies. A couple of months later, Richard asked for my help. He wanted an education in MUTT. As he was attempting to sell stuff that he had no knowledge of, and was getting parts requests for stuff that he couldn't identify, he was ready to learn. My brother in law and I spent several days with Richard, sorting and identifying parts (most of the stuff was binned but shoved into pallet sized containers for the move from Burns Flats). There were over 1 dozen bodies there at that time. Once we got the parts bins organized and accessible, we took a section of warehouse floor, placed a body down, then laid out all of the parts as a 3D, full scale exploded model. With this teaching aid and the TMs that I gave him, Richard was able to pull parts from the bins by using the 3D identifier that we left. I'm sure he became proficient in MUTT in record time. For our efforts, we got 2 more bodies, enough parts to complete 4 vehicles and an awesome rotisserie. I should mention that there were numerous items bearing the ENCORE name (spare tire covers, shipping labels, sales literature), this was definitely the remnants of Encore. In time, Richard moved this stuff to an old ag dealer's building south of Elk City that he owned. I recall a post within the past year or so where someone found a bunch of M151 wheels and tires in a van trailer in a small OK town. I was sure that it was Richard's stuff and that I had been in that trailer in the past. After poring over small town intersections south of Elk City, I think I found the place. If anyone is near Carter OK and wants to check out these GPS coords 35°13'09.1"N 99°30'19.4"W, I think you'll find the remains of this stuff.

Here's a question; did Encore make their own bodies or where they contracted out to someone like Sandy Engineering?
David Pizzoferrato
Pizzoferrato Ent./Weebee Webbing

Visit our Website! odcloth.com for your MV Canvas and Webbing needs

Encore made their own bodies from what we were told years ago by a member that actually worked for them. What you are saying is really interseting and it throws and big assed monkey wrench into the Sandy Engineering theories. I have seen paperwork indicating that Sandy bought out Encore but now we have first hand knowledge that this may not be true. And the game goes on.

I have to say, all this really supports the name, "MUTT" if I recall someone on this chat room never heard the M151 being called that

I'm going to jump in here for a moment. First, and to refresh your memory Rick, the other manufacturer in Texas was Alley Cat. I have been in touch with one of the persons directly involved in that concern. He told me that other manufacturers were taking up some of the work producing their bodies. As a result, there were minor variables in technical aspects of the build, between the subcontractors who were actually producing those bodies, chiefly when it came to the matter of the thickness of the metal used. So, at least when it comes to Alley Cats, two bodies aren't necessarily going to be exactly alike. I don't know if this also took place where other manufacturers were concerned but it is something to keep in mind as a distinct possibility. We have a bad habit of looking at these aftermarket kits as a matter of absolutes and I would caution against it. Never say "never" and seldom say "always" ...as the old adage goes.

As for the it being a Sandy or not being a Sandy, you are actually both right because until a VIN is assigned, the vehicle has no official provenance....at least not where titles are concerned. And where the bodies came from is really of no more concern than where the subcomponents of any vehicle come from. How many manufacturers are involved in the actual production of the components of a WWII jeep or half track? If you don't know, you'd be amazed. It's just one of those interesting things that few people give much consideration to.

One could actually write a small book on the kit-bodied M-151s starting with how it all began with the concern that M151s were death traps. I'm sure it would be mighty interesting reading if it was comprehensive enough and covered all the bases, including instances like the little known tale of the 'Sandy'. Maybe someone will take that idea and run with it. I'd buy a copy.

That's a different type of Mutt (woof woof) not the proper military M.U.T.T.