Any of You did the modification with the black out lights instead of the normal lights in the front grill???
Would like to place one or maybe two but dont know how or where to start.

I think you need to describe what you' re talking about.

Every jeep has two blackout lights in the grille, underneath the normal headlights.
And then almost every jeep (except for the VEP) has a blackout driving lamp on the left fender.

I would like to replace my 2 big headlights with 2 black out lights,look at this jeep:
http://myspace.voo.be/alanvixon/" onclick="window.open(this.href);return false;

I think its the same type of black out that was on the left fender but not sure.

Also seen many pictures of British jeeps with this mod.But most of them used the British black out lamp which was a bit bigger
78th INFANTRY DIVISION
310th INFANTRY REGIMENT

Those special British lamp inserts are really really rare these days.
The last one I found for sale went for 700$.

The US Army 2ed Armored Div used them, as did other armored units, especially the forward units . Plenty of photos are around of the Armored Divisions with them installed. General Clark had a jeep with one. I bought some from Brian Asbury at a show in Pa. last year, and he may have had one in Dayton at the MVPA convention. The American/Canadian ones fit the standard jeep headlight, and are held on with the same ring and screw. Like any original WW2 parts, they are around, but kinda hard to locate when you want one!
Here is mine on my GPW.

"Have fun with your jeep"

Jeep'in NY, About One Hour From Canada

Corcoran Brown made a Black Out Shielded Head Lamp Bulb. All you have to do is remove your regular bulb and replace it with the Black Out version. There is one for sale on eBay right now.

The British did modify theirs with other types of Butler lamps but this is the easiest way when you can find them.
Top

The headlamps look like British made Butler 5" ones.The outer rim had the hooded cover but it was available as a normal headlamp unit pre-war and was fitted to a variety of small cars, namely Austin Sevens.
I had a set on my Austin K2 Ambulance, and these ones had a lift-up flap over the lower lens to allow more light onto the road.
However, they might have had to use them in the Blackout, but for post-war use they were terrible as the maximum wattage was about 35w on mainbeam.

In the 1980's I found sets of new lamps with improved lens, still made by Butlers, which gave a much improved light pattern as the ambulance had a 12v electrical systemn and I was able to drive at night with these quite well. They were marketed under the banner of tractor lamps, and indeed several tractors of the period were fitted with them.

Today, I have found 5" replacement lens units with H4 Halogen bulbs and a sidelight(marker) incorporated which were not available before; these can be fitted easily into either the Butler or Seelite lamp bowls and both 12v and 6v bulbs are available.

I bought several from a Canadian vendor for $15 each.
This was at the East Coast Show Aberdeen in 2009.
They seem to show up at every show here in the US.

If anyone has a Corcoran Brown headlamp b/o lamp in any condition I would be interested... 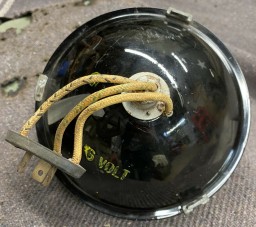 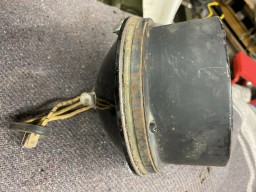 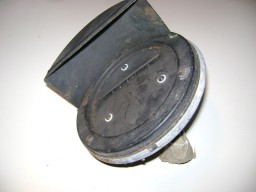