In the quest for a brighter stop lamp, I decided to build an LED board using the brightest LEDs I could find. Lumileds Superflux seem to be some of the best, used for many OEM applications. So I build a board to fit into the tail lamp housing, which would give the largest amount of room for more LEDs. I planned on just using the stop lens, not the light housing.
Built the board, tried it out, pretty bright, but not as bright as I had hoped.
Did a little research on 12v bulbs like the 1157. Turns out the 2357 is much brighter, and a common bulb.
Seemed to put out even more light than the LEDs.

So, I pried off the lens bezel using an open end wrench as shown. A little heat from a mapp torch removed the old bulb from the housing easily. I took the new bulb, and gently ground off the two nibs on the sides of the base. Using some cardboard to locate the bulb square in the housing, I used two part epoxy to mount the bulbs to the housing. I also painted the insides of the housings white. According to my research, the white color is supposed to reflect more light than silver paint.

I created some new lens gaskets out of closed cell foam sheet, and carefully crimped the light bezel back onto the housing.
A pair of channel locks worked pretty well to fold the lip back over.

I think these are going to work well, they were cheap, and didn't take long to modify. As long as you clock the bulb terminals correctly and mount the base sticking out the proper amount, the bulbs should work with the stock bulb connectors on the wiring harness. 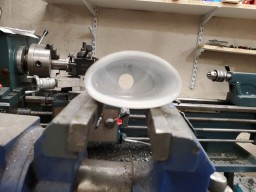 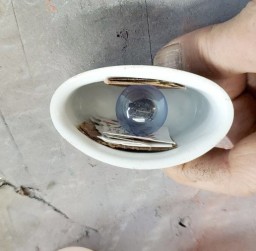 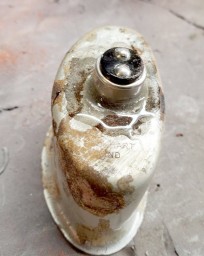 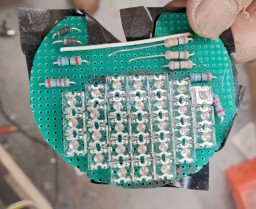 I have that lathe.
No idea how to make that light bulb though.
U. S. Army 28 years.
Armor Branch
Top

If you can run a lathe, you can definitely mod your bulbs!
45 MB - Newington CT
Built to drive!
Top

I like your modification. But I am confused- did you use the 2357 bulb in the old tail light bulb housing? And, if so, what was the LED board used for? Or did you make the LED board, then abandon that in favor of the 2357?

I desoldered the 6V bulb from the original housing, then installed a 2357 in its place.
It turned out brighter than the LED board, so I went with the 2357s.
45 MB - Newington CT
Built to drive!
Top

armyairforce
Sergeant Major of the Gee

I did a light mod on my GPW in 2018. Originally I just replaced the combined brake/tail bulb with a single brake/tail LED. Before fitting the bulb I cleaned and sprayed the inside silver to help the internal reflectivity - shown below. 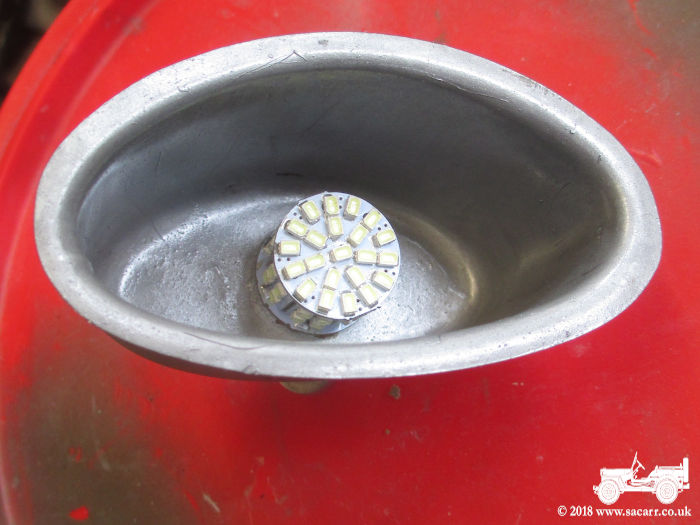 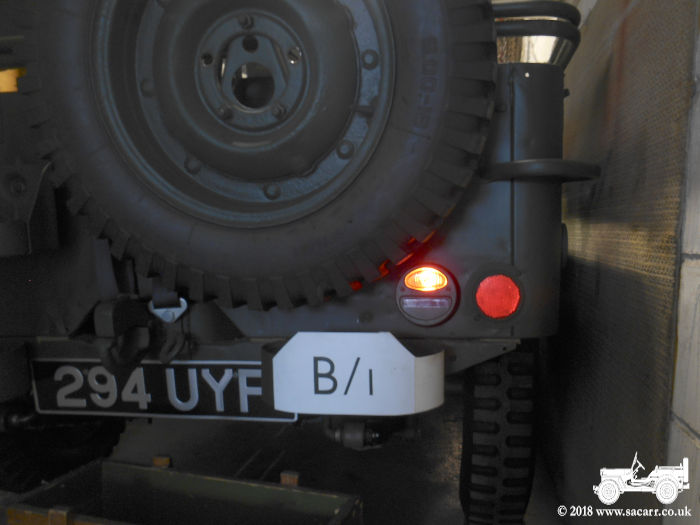 The system worked, but I discovered the brake part of the LED wasn't significantly brighter than the tail light when illuminated. At a distance, it could be difficult to tell if the brake lights were on, so the following year, I pulled them apart again and added a second LED wired into the brake circuit. OK, so not exactly authentic, but neither are LEDs. However, almost every time I go out in the Jeep on English roads, there seems to be someone out there trying to kill me, so I wanted the brake lights to be clear and obvious.

The second LED was fitted into the case with silicone, to one side of the original brake/tail LED. 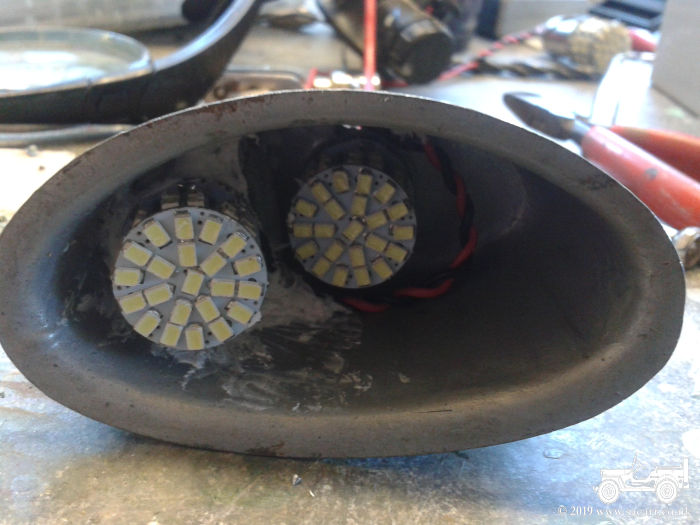 Hopefully this animated GIF shows how it worked out.

ArmyAF,
Where did you get those LED bulbs?
Top
Post Reply
9 posts • Page 1 of 1